In March 2014, a coalition of government and nongovernment agencies set a goal to house 500 individuals and families in three years.

The three year campaign aimed to break the cycle of homelessness for families, young people and adults in our community who were homeless or vulnerably housed. By getting to know each person by name and surveying their individual health, housing and support needs, we responded in the best way to each person and prioritised the most vulnerable people who were sleeping rough, or who were at risk of death.

The campaign began with a community-wide registry where local agencies and volunteers surveyed 961 families, young people and adults in the Brisbane Local Government area who were homeless or vulnerably housed. Since then, a further 1,733 people have been registered through the campaign.

Three years on, the campaign has exceeded its goal by housing 580 individual and family households.

The community applied Housing First principles to assist 373 individuals and 207 families with 430 children to end their homelessness.

With an ongoing commitment to work closely together, partner agencies quickly and flexibly responded to the housing, health and support needs of individuals and families, grounded in the evidence gathered during the Brisbane registry fortnight.

Thank you to all the volunteers, supporters and donors who committed their time and resources to ending homelessness in Brisbane one person, one family at a time. 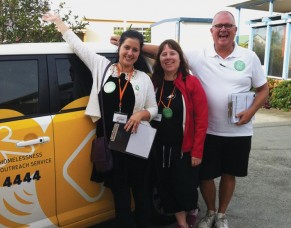